Confessions on the MPR video:

I am grateful for all the feedback that other students and staff gave me. I have to say that I have been thinking about this video for the last week, reflecting about what I meant when I said I feel lost.

To be fair, the process of doing this video helped me a lot in order to gain a new perspective on my practice. Although I started to plan it 15 days before the deadline and even made a couple of animations, it was only until the last 3 remaining days that I was able to focus and develop a plan for it. I started by creating a timeline of events across five different categories, this was a breakthrough because I finally gain a bigger perspective over the whole situation and it helped me a lot to create the basic script for my presentation.

On the morning of the final day, I almost finished the text for my video and started to make the recording of the voice, I had spent precious hours trying to do an animation on blender but time was passing by and the renders where ridiculously slow.

3 Hours before the deadline I decided that I had to improvise and It had to be fast, Powerpoint was out of the question because I was not able to use it to sincronice sound so I did had to go for a more horrific solution i.e. IMOVIE.

The last 3 hours were crazy and I uploaded the thing without having time to change anything, my mind was boiling.

By the end of the whole process I was exhausted and yet exited about the last piece of the video, those questions where really important and I their meaning was expanding in my head.

The next day I started to think about a new SOLID idea with 3 different approaches and I spent the whole weekend working on that.

By Tuesday the 15th, everything was different in my head because I finally understood that this whole process has worked as a self-portrait.

Right after the review of my video, I knew that my interpretation of it was really different from anybody else’s just because I had a different perspective on the last two words…

(but I could not talk about it). 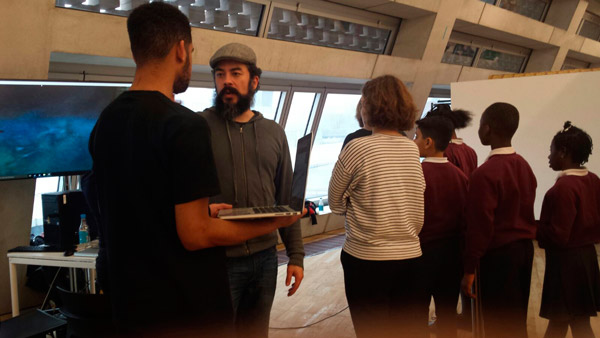